Now You See Me

Home » Movies » Now You See Me

“First rule of magic: always be the smartest guy in the room.” 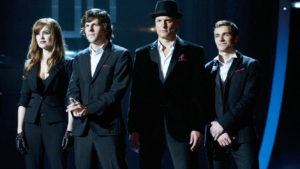 Part magic show, part heist, part Occupy-style wealth liberation, the Four Horsemen magic show comes out of nowhere and leaves the FBI completely baffled. The mysterious performers seem determined to risk their lives to put on the ultimate act–but how real is the magic? And what’s the payoff?

Nicely paced and good clean fun, Now You See Me succeeds thanks to its capable cast and balance of showmanship and believability. Though the plot itself is standard elaborate-heist (plus prestidigitation,) the actors clearly enjoy themselves and work well together. A few of the goofier elements, particularly the secret society, wouldn’t have worked if I didn’t like the actors and general premise so much. But there’s no reason to take this film seriously, and if you’re up for a decent flick that also won’t stress you out, this is probably the show for you.

My only real complaint is that I would have liked to see more of the magicians. Jesse Eisenberg and Woody Harrelson were so good together in Zombieland that it seemed natural that they’d play off each other again. Though their repartee was cute enough, they only had maybe three or four interactions. Dave Franco (who bears a strong resemblance to his older brother James Franco) played an interesting enough character who we didn’t really get to know, and Isla Fisher was introduced as a three-dimensional risk-taker but ultimately played as a fairly flat multipurpose love interest. Considering the relative mountain of attention that Mark Ruffalo got, my guess is the director sacked most of the magicians’ on-screen character development in favor of the guy with the best agent. This is really too bad. I found Rhodes much less interesting than the Four Horsemen themselves and felt that the movie would have been better if it had focused on their interpersonal dynamic and various histories.

Now You See Me also brought a little modern high-class social justice into the mix, but it’s hard to tell whether this was a commentary, a marketing device, or just an easy way to make the Four Horsemen’s thievery seem justifiable (after all, even though we never really get to know them, they’re supposed to be the good guys). I didn’t put a lot of stock in it anyway. It’s forgettable and not necessary, and I didn’t care enough about the film to be particularly affected. Actually, I enjoyed not worrying about framing and philosophical patterns and ontological crap for once. This movie is a show in the best sense: you watch, it looks good, it finishes, you go home entertained. Easy in, easy out.

So Now You See Me isn’t exactly on its way to Cannes, but it’s neat, fun, and won’t make you feel dumb. It’s a good movie night alternative to big budget bashfests and Pixar sugar cubes.